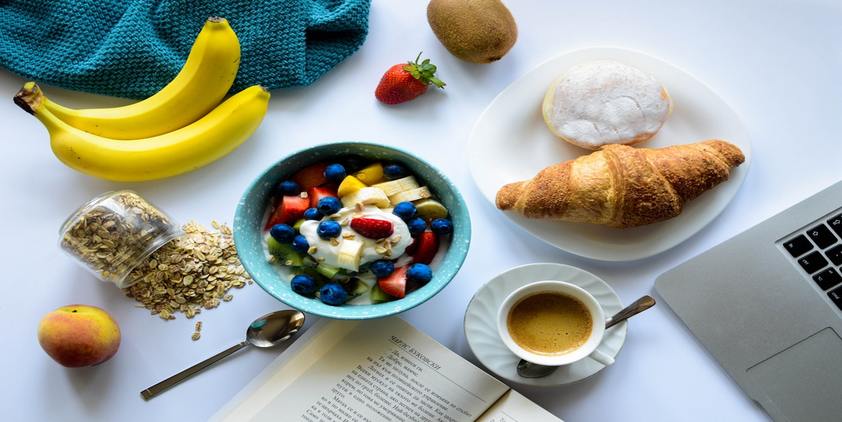 Ever find yourself wondering which choice is the healthiest between two seemingly good-for-you options? Us, too! That’s why we took common nutrition quandaries to a nutrition expert for her take on the healthiest choice, and why that is. Of course, the right answer to each of these depends on what nutrients you are specifically looking for and what your goal is. But here, Rachel Swanson, MS, RD, LDN, Registered Dietitian at LifeSpan Medicine walks us through her interpretation of these common health and nutrition dilemmas. Check out these 6 surprising foods that help you lose weight!

Breakfast: Oatmeal or Bacon and Eggs?

Wondering if the high-fiber option is best or you should skip the carbs and focus on protein? Swanson suggests oatmeal. That’s because it contains beta glucans. Beta glucans are broken down by our gut bacteria, and can produce several physiological effects such as reducing cholesterol, protecting against postprandial glucose surges in those with diabetes, and have immune modulating effects, Swanson says.

“In regards to satiety, the soluble fiber in oatmeal forms a gel in the stomach which delays stomach emptying, and makes one feel full for a longer period of time.”

A small double-blinded randomized trial conducted with overweight to obese men and women in 2013 confirmed nearly 90 percent of those assigned to beta glucans-containing oats reduced their body weight compared to control, had a slimmer waist-to-hip ratio, a drop in LDL or “bad cholesterol”, and improvement in liver function.

Skip both, Swanson suggests. “This isn’t a popular viewpoint, but the bottom line is that we need to stop reaching for sugar-laden snacks,” she says. “From longevity and anti-aging standpoint, it’s not beneficial. Even emerging evidence is beginning to show that it isn’t particularly helpful to keep our body in a ‘fed state’ all day long.” That means it’s okay to feel a little hungry once in a while. “A conventional granola bar is nothing more than a candy bar disguised as something healthier,” she says. “Pure fruit-based smoothies can be highly concentrated in sugar, and likely excessive if they are part of your normal routine.” Consuming a smoothie comprised of 100% fruit has a different metabolic consequence compared to one containing only one serving of fruit because it’s blended with a selection of other nutrient-dense ingredients such as dark leafy greens, healthy fat, and protein. “The latter is ideal,” says Swanson.

Sipping a choice like green tea delivers antioxidants, while decreasing the amount of free-radical DNA damage over time, and boosts antiviral immune function, to name a few, says Swanson. She suggests squeezing lemon into your green tea to increase the bioactivity of catechins like EGCG.

When you think about drinking green juice, be cautious until you know what it contains. If it’s actually all greens, then go for it, says Swanson. “On the other hand, if it’s a blend that contains a large majority of juiced apples (which is quite common) then let’s keep it real – you are drinking apple juice.”

Sweetener for Your Tea or Coffee: Table Sugar, Agave, or Stevia?

Make stevia your go-to if you are looking for that touch of added sweetness in your morning coffee. “This is a non-nutritive sweetener,” says Swanson. Made from an extract of plant leaves, this means the sweetener has no calories.

Grab a salad if you’re buying lunch during your workday. But bear in mind this choice has its own caveats, our nutritionist advises. “You can still manage to pack in a lot of sugar and fat, depending on your choice of dressing and toppings. But at least you can see everything that’s added… and can take it off or ask for it on the side.”

With a big creamy bowl of soup…we will never know the exact combination of ingredients actually used in its preparation. Creamy decadent soups at restaurants typically have lots of heavy cream, a generous amount of salt and sugar, as well as additional oil which may or may not be high quality, says Swanson. Soups are likely to contain a ton of sodium as well.

Go for the appetizer! “Okay, this clearly depends on your choice of appetizer, since in theory, one could select something just as unhealthy as a dessert!” says Swanson. Hopefully, you will take the opportunity to be ‘healthier’ at the start of a meal versus at the end. For example, splitting a light salad, ceviche, or lean protein skewers among your party would be ideal compared to digging into a double-decker chocolate cake with ice cream, she suggests. If you want something after dinner, choose a decaf cappuccino or fruit plate.

Having a Drink at a Party: Red Wine or Light Beer?

If you choose to drink, go with a glass of red wine, advises Swanson. There are some studies that suggest the effects of the polyphenols in a glass of red vino have potential cardioprotective properties.

“Ultimately, it’s difficult to tease out this effect from red wine alone since other factors may account for the observations seen in studies regarding cardiovascular health,” says Swanson. For example, those who enjoy red wine may also consume a Mediterranean diet pattern and have an active lifestyle (which would explain their heart health)! If you’re going to have a glass, make sure you drink water before or afterward to help stay hydrated. Here’s how to prevent a hangover.

Hit snooze on that early alarm and sleep in. (Thanks, Swanson.) You can always squeeze in a workout later in the day. Sleep deprivation impairs glucose regulation and increases appetite due to the dysregulation of hunger and satiety hormones. Some research suggests that lack of sleep is associated with a higher calorie intake the following day – which can be especially problematic for anyone with weight loss goals! So enjoy a few extra hours of sleep, guilt-free.