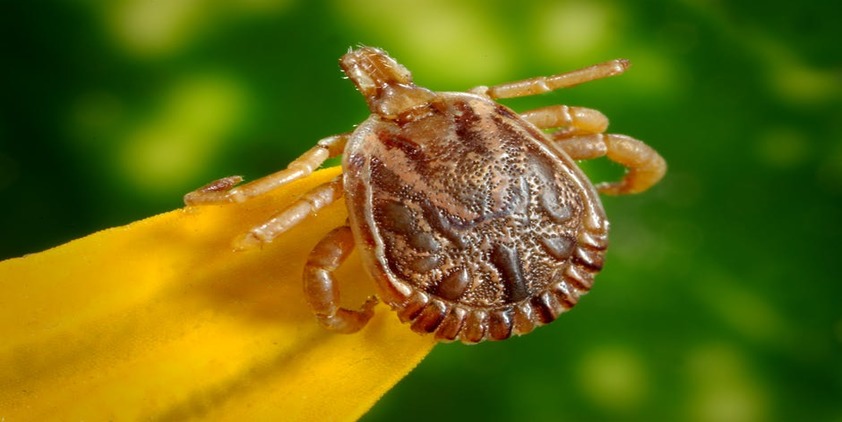 Lyme disease cases increase in the summer because people are outside more, often hiking or doing activities in forests or grassy areas where deer ticks live. “Every year, it gets a little worse than the year before,” says Dr. Aucott. “Now, it’s up to 300,000 new cases a year.” Lyme disease is almost always transmitted by a tick, says Dr. Aucott. Keep in mind that your pet could act as a carrier of ticks. They might catch a ride on Fido’s fur after your hike and as he brushes up against you, the tick can jump on your leg and bite you.

This particular bacteria or pathogen can only live inside a host animal. “It’s also called a vector-borne disease,” said Dr. Aucott. “[Lyme disease] is transmitted from animal to animal by the bite of a tick. The vector is the tick just like the vector is the mosquito in malaria,” he says. Even if you removed an infected tick soon after a bite, you could still get Lyme disease.

“Within seven to 14 days after removal of an infected tick, an enlarged—at least two inches in diameter—skin infection or rash will develop at the tick bite site if that tick has transmitted Borrelia burgdorferi (the Lyme disease bacterium),” says Dr. Wormser. This rash is called “erythema migrans.” “It’s important that any individual with tick exposure look once daily at the entire skin surface to see if a rash has developed for 30 days,” Dr. Wormser adds. The rash might like a bull’s eye but only about 30 percent of rashes look like that. “The rashes are usually uniformly red or bluish-red and round but they don’t have that ring within a ring appearance,” says Dr. Aucott.

Sure, you could blame the heat or a busy summer schedule, but feeling fatigued is a sign that the tick you pulled off might have infected you with Lyme disease. “Sometimes these symptoms aren’t recognized by the patient because they’re too mild and they don’t experience any symptoms,” warns Dr. Aucott.

Experiencing chills during hot summer months might indicate that you’ve been infected with Lyme disease. It’s one of the flu-like symptoms, like fever, body aches, and headaches that are a symptom of the early stages of Lyme disease.

Be on the lookout for a fever or a headache if a tick bit you. It’s an early sign that you might have contracted Lyme disease.  Take your temperature daily while continuing to look out for that telltale rash.

When one side of the face is drooping, it could mean a number of things, from a stroke to Bell’s palsy, or a symptom of Lyme disease. People with facial palsy caused by Lyme disease may not have other symptoms. Make an appointment to see your doctor right away. Lyme disease will need to be confirmed with a blood test. In phase one you’ll feel achy and like you have a summer flu, says Dr. Aucott. This is within the first few weeks. If you don’t get treatment for Lyme disease, phase two can develop into meningitis, hepatitis, Bell’s palsy, and an irregular heartbeat in weeks four through eight after the bite.

“Arthritis, i.e. joint swelling, can occur up to six months after the bite, but may develop sooner, and even up to two years later,” says Dr. Wormser. “Lyme arthritis is considered a late manifestation of Lyme disease.” This last phase of untreated Lyme disease also includes joint numbness, adds Dr. Aucott.

If you think you might have Lyme disease based on your symptoms, make an appointment with your doctor right away. He or she will administer a simple blood test that can confirm whether you have this disease, says Dr. Wormser. “The blood test doesn’t turn positive for three to four weeks,” says Dr. Aucott. “At the earliest stage (week one and two), the blood test is usually negative.” Keep in mind that not everyone with these symptoms who tests positive for Lyme disease has the disease; it might be from a prior asymptomatic infection, says Dr. Wormser.