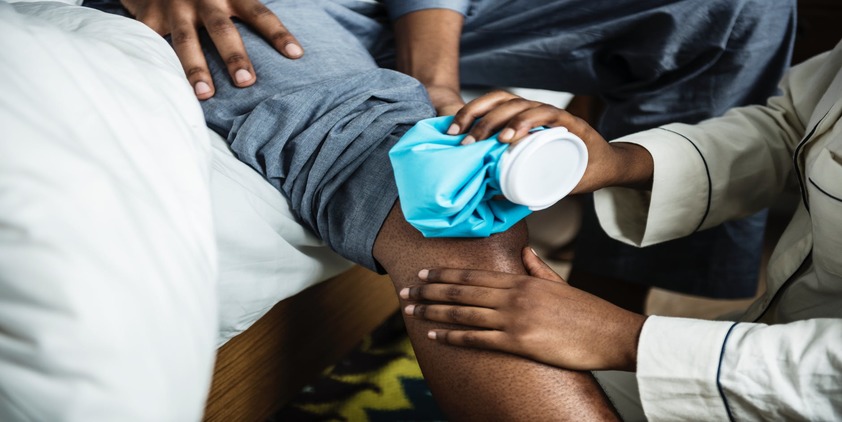 If you’ve been diagnosed with arthritis, you may be looking for alternative remedies to treat symptoms and relieve pain. Whether your pain is from an autoimmune disorder, rheumatoid arthritis, or if it’s osteoarthritis caused by wear and tear on the joints, there are expert ways to relieve arthritis pain and joint pain. “The first thing I do in my practice is look at what the sources of inflammation are,” says Aviva Romm, M.D., midwife, herbalist. “I want to know, is it autoimmune arthritis, like rheumatoid arthritis? Or, are we talking about osteoarthritis? If it’s rheumatoid arthritis, then there’s also an autoimmune component that is really important to keep in mind. From an autoimmune perspective and a chronic inflammation perspective, you have to look at intestinal hyperpermeability,” Dr. Romm says. There’s hard science backing up the relationship between what happens in the gut and inflammation in the body, she says.  Follow these seven steps to improve arthritis symptoms naturally. Read about the best and worst foods for Arthritis.

Repair Your Gut With Supplements

Dr. Romm suggests using certain supplements to heal your gut and relieve arthritis pain. After getting clearance from your doctor, you can try zinc carnosine, which has been studied in people with ulcerative colitis for healing those junctions in the gut. “There’s also an amino acid called, L-glutamine, which has been shown to help restore the gut lining,” says Dr. Romm. Ginger is also anti-inflammatory for the gut, she suggests. Turmeric has been found to relieve inflammation. When you’re using it to heal the gut, use the spice, turmeric. “When you’re using it for joint pain and inflammation, you have to use turmeric in the curcumin form,” Dr. Romm says. “There’s an herb called Boswellia that’s found to be helpful for osteoarthritis, and also a little bit for inflammation in the bowel and inflammatory bowel disease. It’s been found to be effective for pain relief,” she says. Sam-e (S-Adenosyl methionine) is a supplement that has also been found to help relieve osteoarthritis knee pain, Dr. Romm says.

“Several topical herbal preparations have a substantial amount of science behind them,” Dr. Romm says. One such herbal remedy is called capsaicin, an extract that comes from hot peppers. “It inhibits, with use over time, something called substance P that comes out of the nerves and registers pain. She recommends getting a botanical capsaicin ointment from the pharmacy and rubbing it on the affected joint for a few days about five times daily. Then, decrease to three times a day, and then once a day. “It’s very effective as you’re blunting the nerve fibers so you don’t feel pain,” she says. Make sure you wash your hands so you don’t get this in your eyes or it’ll burn. You could also apply a topical product to the joints that contains wintergreen oil.

“Many people with arthritis experience fatigue often because the pain affects them but also because the inflammation makes them feel tired,” says Dr. Romm. You know to aim for seven to nine hours a night, but keep in mind that if you’re not sleeping well, that makes the pain feel worse, and it makes inflammation worse, she says. Scientists have discovered links between chronic pain and a lack of sleep, particularly when someone suffers from a painful condition like fibromyalgia or arthritis, which might be linked to insomnia. Learning coping techniques like cognitive behavioral therapy (CBT) has proven effective in helping improve sleep habits in those who suffer from chronic pain.

Do Different Types of Exercise

“For those who are able to exercise with arthritis, keeping a good range of motion is very valuable,” says Dr. Romm. “If you have joint pain because of osteoarthritis, and you’ve had a lot of repetitive motion—like runners putting stress on their knees—you likely got arthritis partly because of the repetitive stress,” she says. “Anyone who does a repetitive motion over a limited set of joints is often going to get osteoarthritis.” Balance out your body by doing activities that use other large muscle groups, Dr. Romm advises. If you were a runner, you might want to pick up swimming or dance aerobics to change up the motion and reduce effort on a specific body part, like your knees. “I recommend yoga to pretty much anyone because it helps improve the suppleness of the joints,” Dr. Romm says.

Being overweight or obese could lead to painful arthritis problems in the future if you don’t already have them now. “People who are extremely overweight and carrying a lot of weight will sometimes get osteoarthritis of the knee,” says Dr. Romm.  That’s likely due to the cartilage and the soft tissue that cushions the knee wearing away, so the bones from the lower leg and the upper leg are rubbing on each other, she says. For those suffering from rheumatoid arthritis (RA), being at a healthy weight was linked to achieving remission (and staying there) in the early stages of an RA diagnosis after treatment, according to research. Those RA patients who are overweight or obese when diagnosed may be harder to treat, according to the study results. Work on getting to a healthy weight if you’ve been diagnosed with arthritis to reduce the load on your joints and improve the effectiveness of treatments.